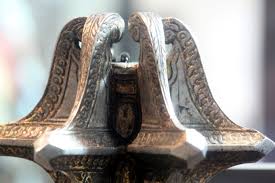 I am almost done with the first editing run. It has taken me quite a while mostly because of procrastination. With that said. Here is an excerpt from tonight’s edits.

The savory stew was so thick Ruso served it on a plate. The time it had cooked left the vegetables soft and infused with the spices and flavors of the meat. Serge felt life creeping back into his senses as he sopped up the gravy with the large piece of bread the stew had been served with. Over the sound of the cheerful mess hall and his own chewing, he could hear Ruso giving good-natured verbal abuse upon each Jagare she serves.

Out of the corner of his eye, a flash of quick but fluid motion materializes into Isabella. She leans down from her cross-legged position on the table and peers at Serger with her typical curious and just off center stare. She is close enough that her smell of forest mingles with his meal. He had never had a chance to just look at her since he met her he could see the taunt muscles in her forearms as she playfully pushed the envelope of how close she could get to his meal before he moved to protect it.

Before he could stop her an ink-stained finger plunged into his stew and was quickly returned to Isabella’s mouth. “I have never been friends with someone who has spent time in the prison,” she said around her own finger.

“Well, I have never known someone who can appear out of thin air and is a stew thief.” Isabella smiled at this.

Isabella appears sitting cross legged on the table staring at him. So sudden was her appearance that Serge let out a yelp of surprise.

“Things have been busy since you left. Monsters almost every night before dinner. ”

Serge looked up from his food. “Really that seems like a lot.”

“It would not be if we weren’t dealing with a significant birthday.”

“When a holiday or something significant happens we mark time for six years later. On and around that month there will be a lot of children possibly leaving the age of innocence. This way we can be alert. The problem right now is, there is no significant birthday. Also there are Insanier in the city.”

“You need to finish your food,” Isabella continued “There is a glow tonight and quite a few of us are going; I want you to come.”

“What is a glow?” Isabella looked stunned. “I live in the great forest and even I know what a glow is! There are places in the city where the ether becomes thick merchants and musicians gather there and burn Marrow Weed to make the ether even thicker. People come and dance and eat treats in the brightness. It is fun and I want the prison bird to come with me.”

Serge wondered what Durwin would think, should he ask? Serge had been feeling more and more attached to Durwin a feeling that he remembered as one might feel about a parent. Isabella snapped her fingers at him. In her unique graceful way, she flowed down off of the table to the floor. “Come on I don’t want to be the youngest there!”

Fifteen Jagare stood at the front door of the headquarters. Once Serge and Isabella joined them they all turned and headed in the same direction. Even as they walked and joked with one another the Jagare youth seemed to be naturally in sync. “I worry about the kids here,” Isabella said suddenly. “In the wood, there are fewer monsters. Some of the animals the briarthorp, wolves and great owls hunt and kill us. Children are taught that lying leads to more predators so there are less kids and families hurt. Here it seems like no one is teaching the children really. They just let the first lie happen without remorse and so many pay the price.” Serge could see for the first time that Isabellas intensity was not some kind of animal instinct from the great forest but genuine concern for everything she cast her gaze upon.

“You seem to really care for what you do.” Isabella gave a rare smile maybe the first he had seen her give. “I do.”

“I finally have something I care about too,” Serge confessed.

“Funny I thought I only sensed anger on you before the prison time. I can tell there is a difference.” Serge ran his finger through his hair. “Yeah, I grew up in a fishing village. My first lie killed my parents but Durwin has helped me. He lead me to the Flashing King.”

Isabella scoffed. “So you are, a believer.”

“Yes, are you not? Do you want to know how to become one?” Isabella put up a hand.

“We may have fought together and I may find you to be someone I would like as a friend but I do not think we are ‘converting me Herre worship’ close.” Serge shrugged. “Fair enough.”

Before they had reached the bridge the either had become so bright that it cast its light across the alleyways and streets surrounding the glow. Serge had never seen anything like it. Torches burned deep blue flames and the either had come in low from the sky and gathered around the. Music, mixed with laughter and the sweet smells of sugar, fruit and bread all mingled with the group of young men and women as they picked up pace. Isabella let out a giggle of excitement and rushed onto the bridge. “Come on Serge!”

She exploded into a group of children who had been dancing wild dances to happy music played by even happier street musicians. The children gathered around her and she danced and smiled with them. Serge stood stunned for a few minutes taking it all in. Carts had been assembled and people walked about them purchasing all manner of sweet looking treats on sticks, large sliced fruit served on even bigger leaves, beer was being served to the adults from another cart. The only think thicker and brighter than the ether was the Laughter. “Laughter” Serge thought. “I haven’t felt this light in a long time.” The pastries tasted as if the bakers and solidified the wonderful music of the musicians. Smiles were on the faces of everyone there.

Serge saw the robed man only too late. He knew what the man was. He knew what their kind was capable. The man grabbed the first person who came within arms reach, a middle aged woman, and slid his knife across her throat so deep it almost took her head off. Serge was reminded that the world was sick he felt the blade cut the budding hope right out of him. The woman fell to the ground dead almost immediately he pulled back his cloak and raised his hands in the air. A wildness was written on his face. “I did not kill this woman!” He yelled at the top of his lungs. Immediately umbra began to flow from his mouth. He gurgled and cursed at the people around him. The umbra spread crawling across the ground with a life of its own and soaking into the tavern stone of the walk leading up to the bridge. The stones shivered and then burst from the ground a golem. The golem let out a low distorted sound of stone and voice. A profaned crown burst in bright purple light forming thick and arcane hovering above the behemoth’s head.

The man erupted in an insane laughter, “May the knowledge of Herre be removed from this world. Even from my own mind!” The golem brought a heavy fist down upon the man. Crushing him beneath its stone fist. “Serge you need to run!” Isabella said in a very commanding tone. Her eyes were wild with fight. Looking into them he felt a contagious indignation bubble up past his fear. “No! Let me help you!” The other Jagare pulled papers from their belts. Writing was quickly applied to the papers, they were flung in all directions causing a heavy mist to arise and cover the escape of the innocents. It seemed to confuse the golem. In response, the profaned crown floating above the golem pulsed and more stones were ripped from the ground and made part of the now larger beast.

Isabella looked concerned. “Okay but you do as I say. Hand me your knife.” Serge complied and she quickly wrote several words on the three sheets of red bordered paper. The paper adhered to the blade. She handed it back to Serge. “Be careful with that it is sharper than any smith could make it and it will never dull.” Serge looked at the surface. It was as if the paper had become part of the blade not just covering it. “It will easily cut through the stone. What you are going to do is cut the golem’s leg to make it unstable. The rest of us will take it down.” A whistle came from the thick fog and a piece of paper floated into the air and burst with a loud bang. “Now!” Isabella yelled to Serge. He ran with all the speed his legs had towards the distracted golem. Another Jagare ran alongside him towards the other leg holding a single sheet of paper that stood straight and unwavering in the wind.

Isabella was right the blade slid through the stone of the golem’s leg. The cut was all the way to the hilt of his blade. The other Jagare used the paper to make a similar cut on the opposite leg. This caused the golem to falter and fall to its hands and knees. The other fourteen Jagare were on the golem placing sheets of paper on its head and back before running away from it. Suddenly the sheets of paper exploded. The force of the consecutive explosions broke the rock apart and threw the profaned crown and head away from the main mass of the creature. Isabella yelled to Serge. “Break the crown.” Serge ran past the broken body of the golem to the purple glowing head and crown. Serge slid his knife between the ethereal characters of the crackling halo and pulled as hard as he could. The knife did not break the crown as easily as it cut through stone but break it did.

With a loud sizzle, the crown faded from existence and what little structure the broken golem had relaxed into a pile of stones. Serge breathed hard waiting for the adrenalin to release his body. Isabella walked up behind him. “Well done!” The older Jagare motioned telling two other to go and retrieve guards and lead them to the body. The rest along with Serge ran back to headquarters. Ebba needed to know that another attack had taken place and this time an Insanier was there out of the shadows as bold as day.