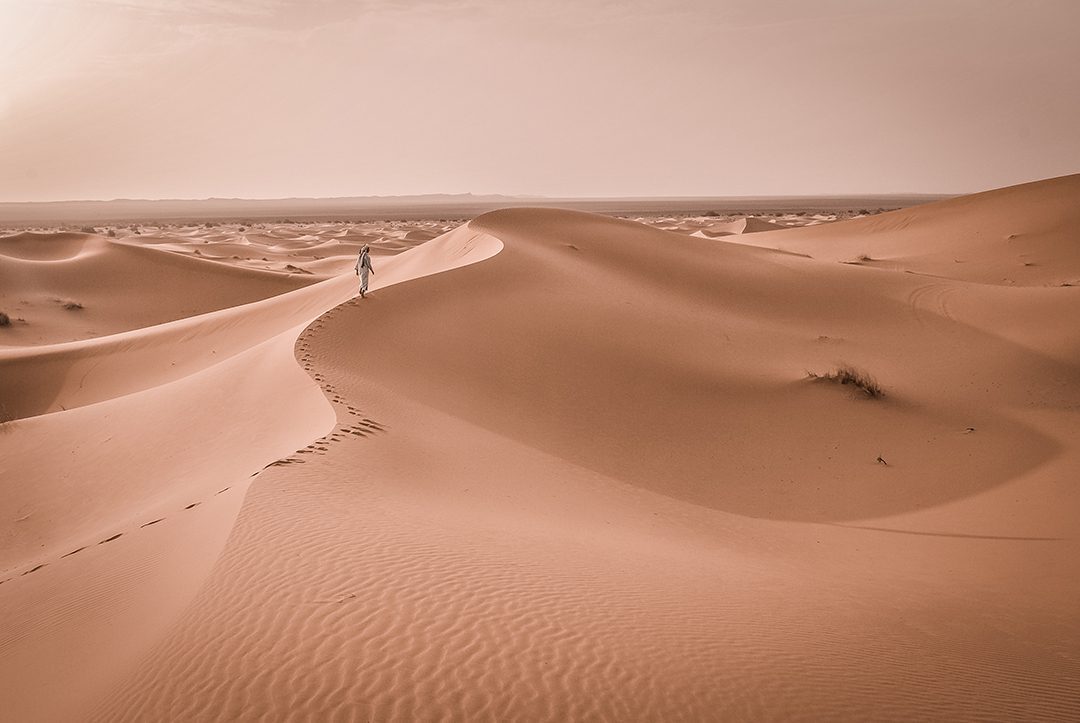 I held the jar tight it was always cool to the touch always. Unlike the endless desert. The wind picked up and I prayed it would not turn into a sand storm. To what I prayed who knows I prayed to the thing that might lesson the miserable existence I was sifting from this sand. Six months of searching and following I had managed six months. I had left my nomadic family to follow the map left by my mom and dad.

I pulled my scarf tighter over my eyes shielding the reflection off the sand and drawing into focus a noorite dancer. The reptilian creature flicked its three nearly metallic tails about dissipating its bodies excess heat. If I was cunning like I had been taught I might eat well tonight. Ben was our hunter but I only had me here in this place. This terrible desolate place only held me and the noorite.

I tightened the rope around the jar lip and fixed it to my belt securely. Never loose it I muttered to myself. I covered my hands in wrappings and drew my slingshot. A strike to the reptiles side right behind the front leg would stun it just long enough for me to kill the beast. It is a small creature no bigger then my head and it’s bite is not fatal but still delivers extreme pain and burns. The creature stores the heat from the desert and only dissipates what it has to through it’s metallic scaled tails.

The sling shot whirled silently in the air and with the grace of motion only gained through consistent repetition and many failures the stone flew and struck it’s mark soundly with ting and thud. I was quickly on the the noorite the leather protected me from it’s scalding skin. The bones in the reptiles neck broke easily. I retreated back to my shaded lean-too and began to prepare the noorite. Because the creature is always so hot the meat can be eaten without cooking it.

As I waited for it to cool enough to eat I consulted my parents old map it showed that the rock out cropping peeking out from the nearest dune was indeed the place where they jar had been found. The noorites meat was tough in between my teeth. As I chewed my kill I pulled the jar from my side and opened it like I had so many times before. A rush of cool moist air spilt from the lid and the sound of running water echoed in the distance.

Through the opening I could see the green of a forest and a lazy river that sounded as if it turned into a water fall somewhere out of sight. I imagined the jar opened to this place somehow suspended in the air. A bright fruit littered the floor of the forest bellow the trees. If I could have ran a rope through the opening and climbed down to that oasis I would have long ago. The opening is only allowed my arm up to the elbow to enter that blessed world. I constantly reminded myself that this is why I left this is why I separated from them.

Long ago our content had been scorched by what the older ones called a celestial event. They said it was as if the sky had been peeled back and for a moment the sun shown brighter than it ever had. I tried to imagine our world like the one through the jar. I nearly cried in the heat. It would not have been so bad except I had the jar to tell me that there was something far better than the desert I hoped to find a larger jar in the outcrop but I also feared that I would find another with a smaller opening more unrealized hope. Sleep was hot and the dreams were of terrible visages.

I stood in the somewhere in our endless desert and watched as the wind kicked up small gusts of sand. The sand would descend onto my family. Gina, Nikki, and little Ben slowly grew older with each grain that touched them. Their lives full of heat and travel but also smiles and contentment burst out from them like an arura. Then they moved beyond me beyond my reach. They were lost to me in the dream. Just like they were lost to me outside of it. Another side effect of noorite flesh.

The jar had laid open next to my face all night providing an occasional gust of cool air. The morning always came early as the coolest part of the day was the only reasonable time to sleep and move about. However, being awake during the day meant I could hunt noorite. I traveled through the biting sand to the outcrop. It struck me that the outcrop not only cast a shade on the overhanging side but it seemed that there was possibly a cave it it’s face.

My heart quickened that I might have found not only the place where the jar had come from but caves were naturally cool and often carved by underground rivers. I scrambled down the dune and rounded past several jutting stones and indeed found myself at the mouth of a deep cave. No sounds emitted from the mouth. Only the ominous reverberations of the wind cutting the desert to ribbons. I set my collapsed lean to down and stretched my shoulders. I stepped into the darkness and waited for my eyes to adjust. The cave was smooth sandstone, smoother than the scales of the sand eel, smoother than the memory of cold milk.

The wind changed direction and cast a gust down the caves throat. It sang. Not beautifully or very musically but it sang none the less. I felt on the edge of something something good. Not wanting to move forward in fear of what came next was more of the same hot disappointment. I ached for this to be the moment this desert nightmare ended. Nightmare; I call it a nightmare but million’s of people live, thrive and die in the vast desert. There is laughter, love, pleasure and purpose to be had. Yet I had this jar. A jar that showed me somewhere else. Some place that I could touch and feel but never really be a part of. This is what made the desert a nightmare. The knowing of something better. Maybe the jar is the nightmare?

I moved forward into the smooth darkness of the cave. It seemed to wrap around me and coax me deeper. Deeper into a place that may have only been explored by the makers of the jar and my parents. The cave is cool and for the first time I realize that a cooler temperature is possible even in the endless desert. What if I do find other jars? What if I do find a way to go to the world of the jar? Would my siblings would forgive me? They trusted me to come back and tell them. But they knew as well as I did. The desert moves and we move with it. The nomadic life meant that you stayed together or you said by for ever. They knew I could never come back their tracks forever lost to me in the shifting sands. Am I dead to them? Are they dead to me?

The deeper I moved into the cave the more I remembered all that I had left behind to pursue the jar. It was as if before all I could think about was the heat, the sand and the noorite. All of it so hot and oppressing. Now, in the cool dark cave now with the smallest amount of discomfort relieved I could see that everyone not everything was the real oasis. I felt the weight of them, I saw my little sisters face as she shed dirty tears while watching me disappear over the horizon. I saw Perco as she clutched the gift she had tried to give me before I left. A gift that I knew meant I had her, her love and her loyalty, forever if I wanted it. There had been a time when I did. But the jar; it promised so much. It promised water and abundance and maybe Mom and Dad.

For the first time in years I removed the jar from my belt and threw it into the darkness. Years I have wanted nothing more than to go to the place in the jar. I have obsessed over it. I have missed so much while I pined away at the thought of getting there. I took myself and hid myself away from Gina, Nikki and Ben all the while planning my escape. I should have brought them along. The weight of not finding what I had hoped and wasting the little time we have in the world with those that we love crushed be beneath it’s heaviness, in it’s own way the jar had dried up everything that made life good. I threw the jar into the darkness. I heard it bounce and then the clang of it impacting something large and metal.

I stood and walked in the direction of the sound and found a large monolith of the same design as the jar. A recess of just the right size for the jar was at eye level. I picked up the jar and placed it into the monolith. There was a mechanical whirring and some clicking as if gears and clockworks were falling into place. Then the monolith let out a final click and it opened like a door. The same lush green greeted me. The air was warm and moist but cooler than the endless dessert. I had found it; yet lost what made it worth it. Maybe the jar is the nightmare.