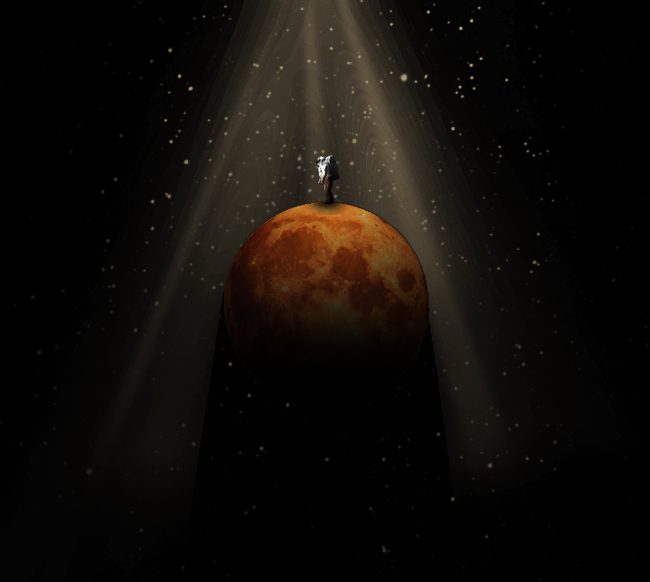 It was so small so insignificant. It pierced the hull of my ship the Aposolith letting in the greedy vacuum of space. I wore my space suite constantly as a precaution against such things. After the red warning lights stopped and the alarms quit screeching I moved through the Aposolith looking for what had done the damage.
I found it. It seemed to be your run of the mill micro asteroid but when I reached out to grab it it moved ever so slightly away from me. Aposolith’s florescent lights burned, flooding my cabin with white green light but this tiny stone was black. Like someone had torn a small hole in reality. No light reflected off its surface and there seemed to be no topography that was visible. When I stared at it I felt that feeling you get right before a cold chill runs down your spine but no chill came.

When things are as quite as things are in space the mind can assign sounds to visuals. The lights in my ship seem to squeal and the distant sun that I strive to keep one of my 2 portholes pointed towards throbbed like a thousand distant heart beats all beating out of step with one another. This thing though it made no sound. It simply was and was not.

I managed to capture it under my coffee mug. The mug really did me little good in zero gravity so containing my visitor was the most use it had since I had left. I felt a little bad about that. Once captured the object did not try to escape. It just floated at the absolute center of its tiny prison.

Then it happened. The Consortium and the Fates both agree that dark matter is just that, dark and matter. What only experience can tell you is that sometimes you can pass through dark matter and sometimes a space ship collides with and is destroyed and on the other side recreated unscathed. I had experienced dark matter once before but the first time was by choice. This time I was caught off guard. My ship drifted right into the jagged cloud of dark matter without an alarm or warning. Just like that the stars they were gone and the sun’s dull roar was silenced. Had it ever existed?

Why did I leave? What was their to gain? Her hair like a far away nebula, it hung over her shoulders beginning to be swept away like the wrapping on a present. I am useless out here. They sent me out here so I can learn? What? Now my coffee mug is broken. She will move on, they probably will have me declared dead. Where are the stars? Have I abandoned even them? I bet if I depressurized this cabin no one would ever be the wiser, that I escaped through death. Seems I am coming out of the dark matter. To see what? The vast unbearable lonesomeness that fills the spaces between. Oh! the sun… The sun!! There is the sun!!

Have you ever stepped out into the midday sun after being inside all day You can feel a slight pain as your irises constrict for the first time all day. That is what the sun felt like at that moment, all over my body. I only saw it out of the corner of my eye as whatever that tiny blackness was burned up at the opposite end of the cabin. I need not ask the question what it was. It follows every man into the great unknown and tries to convince us of things untrue.

My coffee mug is broken… That’s right there is the sun! …the sun!…